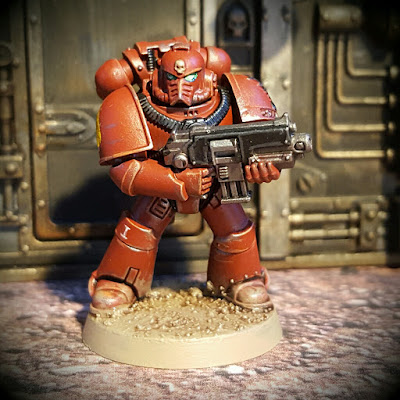 Here are some more Blood Angels Tactical Marines for you, pilfered from the Betrayal At Calth box. As with their predecessors, these chaps are well-weathered and battle-damaged. 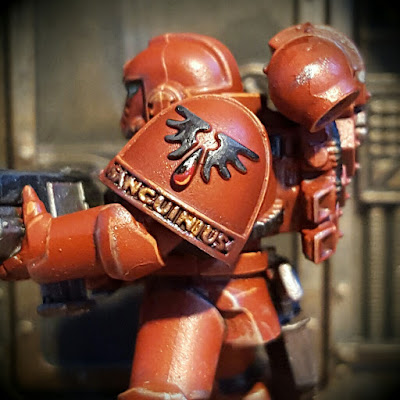 The glazed blood drop is the recurring motif for my army, and will be the motif of my Successor Chapter, the Scions Of Sanguinius. 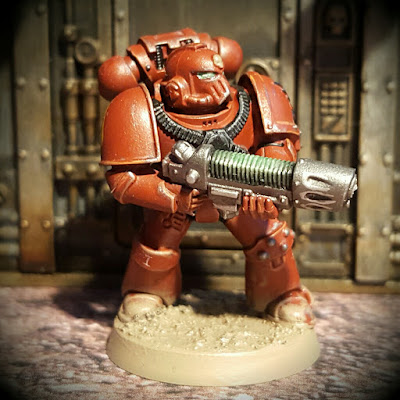 For the Plasma Gun, I used a different technique to usual, and used layers of grey with a Biel-Tan Green wash over them for the power coil. it works pretty well, I think, and complements the lenses on the helmet. 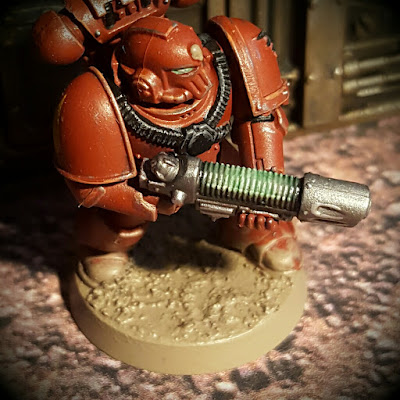 Ditto below with the blood drop motif... 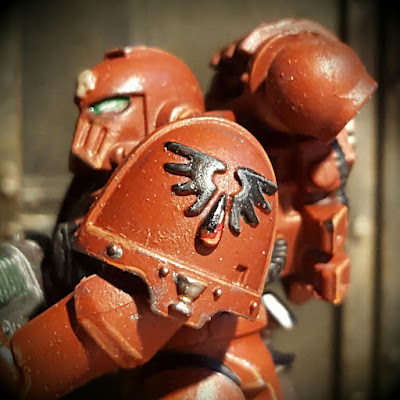 I have taken the time whilst doing up my Tactical Squad to revisit my kitbashed Captain that I did a while ago. I repainted his angel wings black, and made the gold colours bolder and less brassy. Once again, I think it works pretty well, and it ties him in with the grunts. 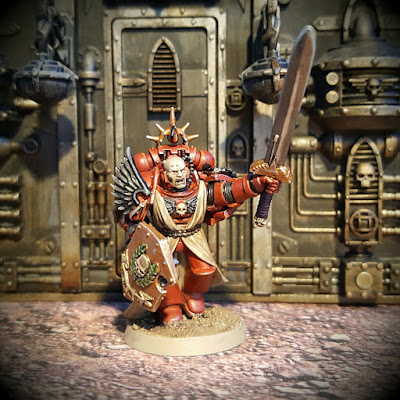 Previously, the blood drops were purple, as well, so revisiting him allowed me to bring that in line with everything else, as well. 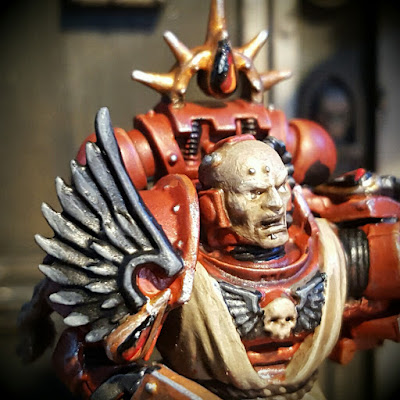 Posted by Blenderovski at 18:36 No comments: 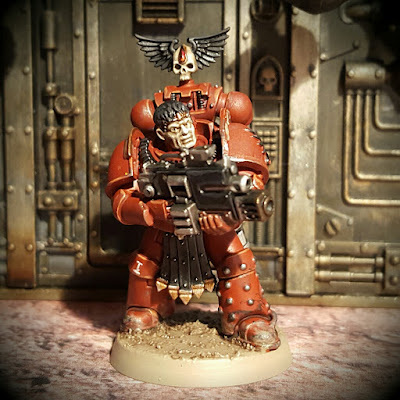 Bonjour! Long time, no see! It has been a long time since I posted anything here, which has been down to a number of different factors - a mini-Primarch, a trip to Japan and Christmas have been the major ones - but I am finally trying to get back into my hobby groove by revamping my Scions Of Sanguinius Second Company. 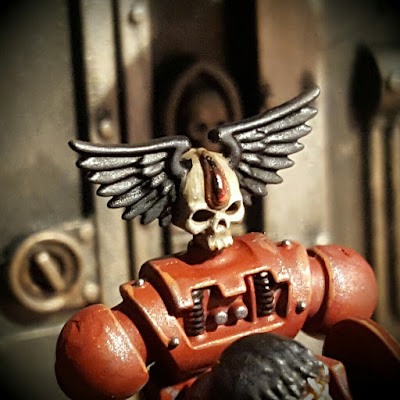 Whilst the Veterans of the First Company (or some of them, at least) featured last year, and are crisp and shiny, these guys will be a lot more rough around the edges, and will all be encased in venerable MkIV Power Armour (courtesy of the BaC box set and some Blood Angel Upgrade Packs). 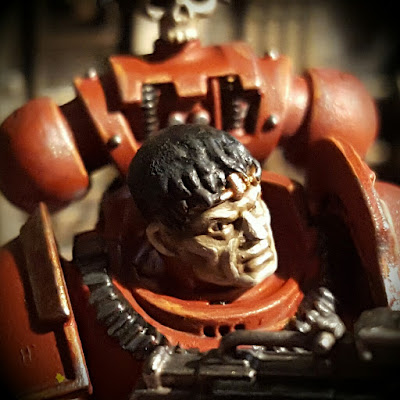 I have continued using the Vallejo Fire Red as a base colour, with Citadel Jokaero Orange for highlights. This time, though, I have decided to water down my Agrax Earthshade so that it doesn't overpower the miniature. 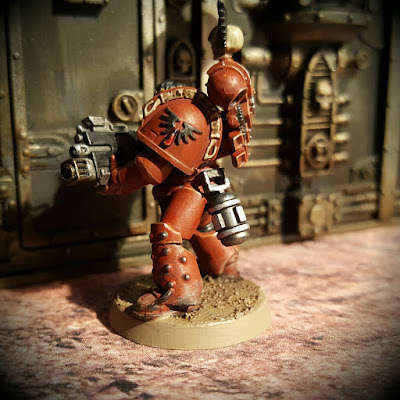 I really like the BaC Tactical Marine set. The details are crisp and clear, and the reinforcements on some of the greaves and shoulder pads is reminiscent of the Rogue Trader era stuff. I approve. For my Second Company, I am going to work on two basic five-man Tactical Squads to start off with, along with their dedicated transports (interchangeable Rhino/Razorbacks), and then pad that out with an Assault Squad and a Devastator Squad to form the spine of a Blooded Demi-Company. 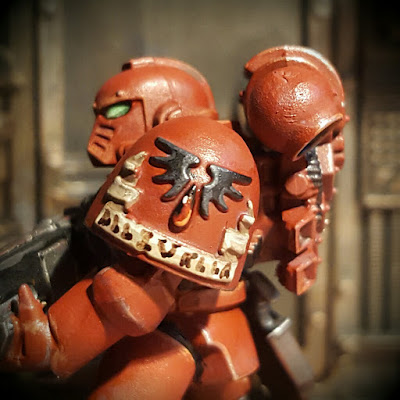 I find that the Blood Angel Upgrade Packs have a LOT of treats in them for the price that they are pitched at. GW are onto a winner with those smaller packs (sub-£10) that allow you to add character to your force. I'd like to see the Space Wolf one. 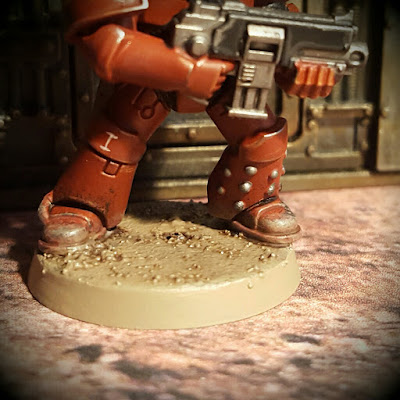 Because I am integrating these guys into an existing force, I opted to mount them on 25mm bases, rather than 32mm bases. My opinion on the 32mm bases changes from week to week, but I find that 25mm bases are perfectly good enough for Tactical Marines. 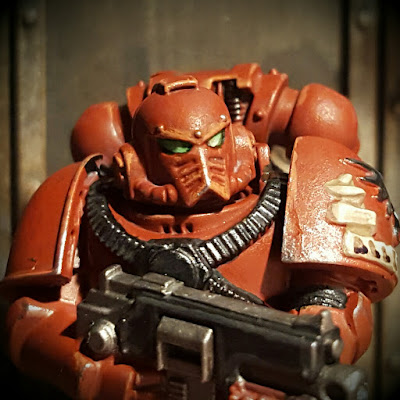 I'm using Biel-Tan Green as a spot colour for the lenses on the Marines, which hopefully contrasts nicely with the Fire Red. 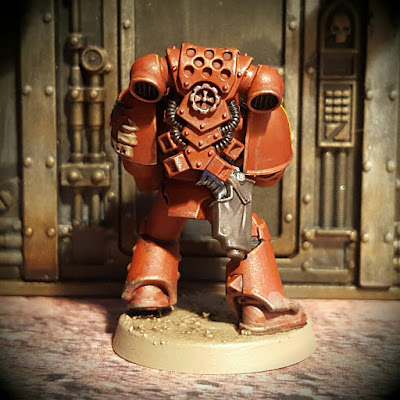 Ah! The nostalgia of old, MkIV power packs! These are eerily reminiscent of the power packs that the old plastic Plague Marines used to have. 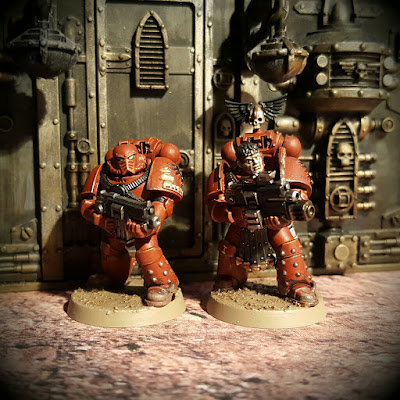 Here my first two Marines are, in all their MkIV finery.
Posted by Blenderovski at 08:06 No comments: